The University of Leicester has an established international and regional reputation for earth observation research. Examples include the development of techniques to monitor carbon stocks in forests and greenhouse gas emissions from soils, agricultural land management, fires and land cover change. The University has a long track-record in earth observation business-facing services supported by local government funding at the local/regional level and by European actors.

The National Centre for Earth Observation is a distributed Natural Environment Research Council centre of over 100 scientists from UK universities and research organisations, with the headquarters at the University of Leicester. The National Centre of Earth Observation provides the UK’s Natural Environment Research Council with national capability in earth observation science – monitoring the health of our planet through satellite instruments and more. The centre’s scientists work on many international earth observation missions, including the Sentinel satellites and have world-class capability in interpreting these data, both directly and through the use of models (data assimilation). The centre supports the increased exploitation of earth observation through national business networks such as Space4Climate, public authorities and international users (overseas development assistance; representation with the Group on Earth Observations).

With strong relationship with businesses, Local Enterprise Partnerships and universities across the region, the East Midlands Centre of Excellence actively supports business growth by connecting academia with businesses and funding to develop capabilities in the region and networks out of the region. This helps identify commercial and collaboration opportunities that can be supported by local expertise. The East Midlands Centre of Excellence is part-funded by the Satellite Applications Catapult and the UK Space Agency.

Within the region, the East Midlands Centre of Excellence works closely with the Universities of Nottingham, Loughborough and Leicester, and has connections and collaborations with the majority of other universities. The regional earth observation business community has a solid legacy and is growing rapidly delivering capabilities domestically and internationally.

To understand the user needs, we actively interact with users, providers and potential users of Copernicus products, data and services. Our current approach is three-fold: firstly to ensure we have close co-operation with research and operational expertise in earth observation in our own organisations; secondly to work through networking events to publicise earth observation data such as Sentinels; thirdly to devote time and resource, if possible, to one-to-one engagements to develop and bring earth observation solutions to operational and market maturity.

We take part in showcase events of the Space for Smarter Government Programme, which is a strategic, national programme established in 2014 and led and funded by the UK Space Agency. It is delivered in collaboration with the Satellite Applications Catapult to drive the uptake and use of space products, data and services across government departments. The showcase events are organized once a year, with presentations from the organisers of the Programme, the UK Space Agency, and the companies who work with public authorities on projects funded through.

We are also involved in the UK Space Agency funded Space Incubator focused on entrepreneurial community of recent graduates and post-graduates, also known as “Leicester Start-up Accelerator”. This initiative is aimed at supporting technology and data driven start-ups aligned with the Universities research strengths which includes space and earth observation.

Thus, the East Midlands Relay actively promotes Copernicus products and services to a wide variety of users and potential users: from pre-start-ups to established companies that operate in the space value chain or use satellite data to develop services to other businesses or to public authorities. The Relay works with both SMEs and large companies. It has established working relationships with public authorities through direct contact and through intermediary companies.

Our activities have resulted in a number of funded projects and initiatives ranging from customer-specific large-scale studies to innovation vouchers for focused investigations to networks and programmes for translation of research to user solutions. The most intense application activities are in forestry, air quality, agriculture and ocean services where we support pre-operational and pre-market activities

As one example, on 19-20 September, we organized a Copernicus Hackathon, supported by the Copernicus EU, The Food Security and Resilience Hackathon, which was an intense event, bringing together an international crowd of more than 60 enthusiastic coders, researchers, designers, entrepreneurs, who collaborated over 48 hours in small teams, using the Sobloo DIAS, to develop prototypes of new software based on Copernicus earth observation data. The resulting ideas and projects will be further supported by the main organisers of the event.

We will continue these activities which are part of a wider strategic initiative by the University of Leicester, the Leicester Local Enterprise Partnership and National Centre for Earth Observation to develop a dynamic space and space enabled community across the region by collaborating with partners to maximize the impact.

This strategy aims at establishing the Space Park Leicester, as a national, globally accessible, hub and collaborative community for businesses, researchers and academia based on space and space-enabled technologies connected to other national nodes. Space Park Leicester will host a cluster of space companies and research organisations, a new Manufacturing, Engineering, Technology and Earth Observation Research Centre (METEOR), which will deliver a 5000 m2 space research and innovation facility to co-locate over 100 researchers, the National Centre for Earth Observation headquarters, and more than 30 industrial and R&D personnel in the early 2021.

We are actively supporting national nodes which are building local clusters around them, e.g. Reading and Leicester for climate services, Plymouth for marine services, London for vegetation and fires, Harwell for high-resolution earth observation applications. We believe that such inter-connected nodes, with a central hub, are the way to reach the maximum number of users. We are keen to support inter-connection of national nodes. Part of our strategy, as research organisations with a market-enabling outlook, is to ensure our innovations, network and industrial engagements stays close to core researchers who are fully involved in providing robustness to Sentinel satellites and their data production. For us, this is a key element as we are able to innovate to meet business challenges and also enable businesses to take advantage of new user-focussed developments such as analysis-ready data and the outputs from the Copernicus Services. 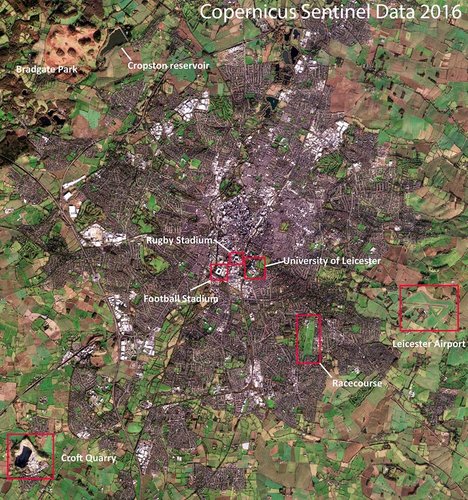