Identification and segmentation of regional user needs by means of a demand/offer matching analysis – example from the “When Space meets Agriculture” project.

TeRN is a public-private consortium founded in 2005 on the basis of a Framework Program Agreement between the Basilicata Region, Italian Ministry of Finance and Italian Ministry of University and Research, in a regional context characterized by the presence of relevant subjects (research institutes and universities, SME and large companies) active in the Earth Observation sector, as well as end-users (such as the Regional Agency for Environment Protection) operating in different sectors but interested in the development and applications of earth observation technologies.

The TeRN consortium includes, in a Triple-Helix model in line with the European policies of technological clusters, research bodies (the National Research Council of Italy - CNR, the National Agency for New Technologies, Energy and Sustainable Economic - ENEA, the University of Basilicata - UNIBAS, The Laboratories University Network of seismic engineering ReLuis), local authorities (Regional Agency for the Environment Protection of the Basilicata Region – ARPAB), large companies and SMEs (e-GEOS Spa and Createc Scarl, a consortium of 14 SMEs from BASILICATA Region) with the aim of promoting the development and integration of different earth observation technologies and methodologies to monitor and mitigate natural hazards, with particular focus on climatic, hydrogeological and seismic risks.

The project activities allowed to create stable relationships and new collaboration opportunities that had a positive effect on the regional earth observation sector in terms of identity, awareness, visibility and competitiveness. In details, Basilicata Region was among the founders of the NEREUS network and nowadays Basilicata space technology experts are actively involved in the activities and initiatives of the network, even with a coordination role.

TeRN is or previously has been part of: (a) the European network of seven active GMES/Copernicus Regional Contact Offices (RCOs) for promoting Copernicus data and services located in UK, France, Germany, Portugal, Poland and Italy; (b) SPACE4GLOBE (http://space4globe.eu/), a European Strategic Cluster Partnership that aims  to intensify Cluster and business network collaboration between Space Clusters and Clusters in other sectors (Mobility, Energy, logistic, Creative-Industries and Agriculture) in order to support the internationalization of own SMEs’ members..

The TeRN approach to understanding user needs in our region is manifold. In the following, some examples of different activities carried out in the past are reported.

As one of the promoting partners of DORIS_NET (Downstream Observatory organised by Regions active In Space – Networking) project, TeRN created and hosted the Basilicata GMES/Copernicus RCO, contributing to the identification and segmentation of regional user needs by means of a demand/offer matching analysis.

TeRN continued to support and host the Basilicata RCO even after the end of the DORIS_NET project, also thanks to the NIBS (Networking and Internationalization of Basilicata Space Technologies) project, funded by Basilicata Region (ERDF 2007-2013). In this framework, TeRN lead the regional initiative devoted to the creation of local Nereus Mirror working groups, to better identifying and understanding local user needs and to support the active participation of Basilicata representatives and experts in NEREUS WGs activities.

In the framework of Space2IDGO (Space Clusters International Industrial Diversification Go) project, funded by EU COSME program, TeRN also contributed to the implementation of the international business development action plan, as defined during the SPACE2ID (Space Clusters International Industrial Diversification) project, the first structured action for Space Service Providers to open a dialogue with “non-space” diversification sectors (i.e. MELCA - Mobility, Energy, Logistics, Creativity and Agriculture). In this framework TeRN, as member of  SPACE4GLOBE, an European Strategic Cluster Partnership between 5 European space Clusters and 5 non-space European clusters (from the MELCA sectors), organized with NEREUS and the patronage of Basilicata Region, and with the support of COPA COGECA and the ERIAFF Network a two-day thematic workshop on ‘When Space meets Agriculture’ (Matera, Basilicata, 14-15 November 2016) with the involvement of the ’Agrifood’ user community.

As mentioned above, even before to be officially recognized as a Copernicus Relay, TeRN was active in organising and implementing several activities and initiatives devoted to promote and disseminate the EU Earth Observation flagship program Copernicus at regional level. Most of the initiatives were devoted to: i) increase awareness; ii) facilitate demand-offer matching; iii) education and outreach.

TeRN coordinated the contribution of Basilicata to several EU GMES/Copernicus-related initiatives (seminars, meetings, workshops, education and training events, publications, etc.) aimed at promoting the use of Copernicus data and services and stimulating its uptake. Examples may be found in the NEREUS initiative ‘25 uses of GMES in the NEREUS Regions’ in the`Windows on GMES - Discover what GMES can do for European regions and cities` publications, in the ESA-NEREUS joint volume ‘The growing use of Copernicus across Europe’s regions’

Furthermore, in the framework of the Copernicus User Uptake Framework Contract, TeRN with its experts has supported NEREUS by directly participating and actively contributing to specific Copernicus Info sessions and training events (e.g. Tallinn, Estonia; Aarhus, Denmark; Valletta, Malta; Bratislava, Slovakia) and other Copernicus-related initiatives (e.g. Copernicus values chain workshop). In this context, TeRN has developed ad-hoc materials to promote Copernicus for the Local Regional Authorities (one example is represented by the mini-module on ‘Space application in Agriculture’).

In addition, specific actions devoted to mobilise demonstration projects and user/provider collaborations were carried out. One example is the collaboration between CNR and the Regional Office of Civil Protection for testing the use of frequent satellite observation to face fire risk in the region. In the following, one more recent example of a successful activity is summarized.

TeRN was part of the organisation of the workshop ‘When Space Meets Agriculture - Fostering Interregional collaborations, investments and definition of user requirements’ (Matera, 14-15/11/2016), that focused on significance and potential of Europe’s space systems for challenges in the agricultural sector. The workshop got a strong response and brought together almost 150 participants from different sectors, amongst which numerous representatives of public administrations. As a follow up of this initiative, a networking activity between users and providers has been sustained and, also within the Regional Program of Rural Development, funded by the European Agricultural Fund for Rural Development (EAFRD) financial instruments for agriculture and rural development in 2014-2020, a specific Operational Group on AGROTECH has been created in Basilicata Region, as part of the European Innovation Partnership (EIP-AGRI). In this framework, a SME (GeoSpazio Italia s.r.l.) developing innovative earth observation-based solutions (e.g. PROSIT – Satellite product for vineyard) and a local consortium of wine productors (Cantina di Venosa) started a collaboration devoted to testing the systematic use of Sentinel-2 products to monitor the growing evolution of vineyards as well as to assess the vegetation status in the space-time domain, in order to timely identify possible stressed area (caused by diseases, dryness, pests, etc.), offering an effective tool for farmers to promptly (re-)act.

Such a demonstration project is in progress, and the estimated income for the space SME is about 20K€ for one whole season of provision of earth observation-based maps and products. 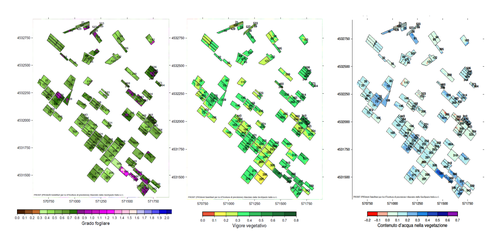